SLANG IS SLANG FOR SLANG!

Slang is, essentially, a language within a language, wherein we use words that actually mean different words even if we're speaking the same tongue as everyone else. Legend has it that the word “slang" came from the shortening of “short language", so really, slang is slang for slang. 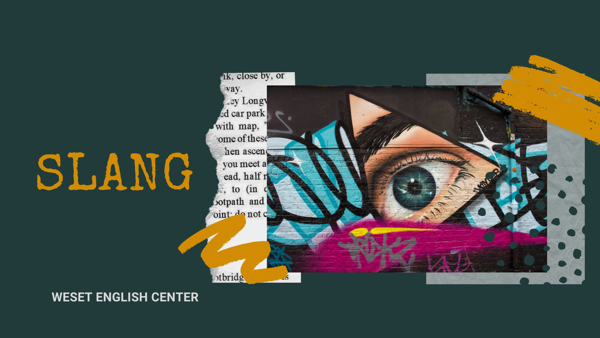 Below are a few popular English slangs:

Because the ace is often the highest card in the deck (as in Black Jack, for example), ace is used to depict excellence and good quality. As a slang it means “to complete something excellently".

🔸 Example sentences:
Congratulations, I heard you aced the test!
I aced my physics exam!

Diss is short for disrespect, and means to insult or attack someone. A “diss track" is a song by one artist that primarily serves to verbally attack (usually) another artist.

🔸 Example sentences:
Why are you dissing me?
Did you hear? Drake just released a diss track.

This is a slang that came from the world of drag queens - (usually) men who dress up to imitate and often exaggerate female gender traits. Shade means witty and snarky insults, so to throw shade means to insult someone. Shady, in terms, means to act sneaky and suspicious.

🔸 Example sentences:
My brother's been throwing me shade for dating his ex.
That guy's really shady, don't come near him.

Prop formally means a pole or beam to support or to keep something in position, but informally, it means to give credit or acknowledgement for someone's hard work. When used as a slang, it is always in the plural form.

🔸 Example sentences:
Props to you! Good job!
You gotta give him props for his patience, I would have given up a long time ago.

🔸 Example sentences:
You got the job? Kudos to you!
Kudos to everyone who helped organize this party.

Tea is gossip traded between close friends, and like “shade", it originated from drag culture, specifically black drag culture. “Tea", or at first, “T" was short for truth. It then came to mean gossip, and is usually used in the phrase, “That's the tea, sis!” to mean “This is the general gossip being circulated.” To spill the tea means to pass the gossip to someone else.

🔸 Example sentences:
YOU GOT A MINUTE? I'VE GOT SOME MAJOR TEA TO SPILL.
That's so lame, ugh. Weak tea.

Slang is something that changes constantly, depending on the users of the language. Different groups of English-speaking people also have different slangs, so it's important to be mindful and learn the local slang rather than assuming your slang will be applicable to someone else’s. However, a helpful site (although not always very trustworthy) is Urban Dictionary. With helpful explanations and examples from users, it's a dictionary for slang, and also provides sarcastic, snarky definitions to other words. Generally a pretty fun page to mess around with. Good luck, and have fun!